We all know that the first person who was successful enough to jailbreak an iPad and iPhone running on iOS 13-13.5 versions was Pwn20wnd. On the first hand, this method was only there for A8X to A11 powered devices which were then gradually placed with newer A12 models which include iPhone XS.

Moreover, unc0ver is now working up to iOS 13.2 which is able to support all the A12 models that include iPhone XS, XS Max, and XR all these functions on iOS 13 to iOS 13.1.2. This page will teach you how to Jailbreak iOS 13 using Unc0ver or Chimera Jailbreaks. One of the methods we will be sharing will require no computer/pc.

Now let us understand the concept of jailbreaking. Jailbreaking means unlocking all the restrictions on iOS to gain access to the applications and tweaks that are not allowed by Apple. By doing this you transform your iPhone’s features and interface by the way of Sileo and Cydia apps. We will also be sharing free iOS 13 Jailbreak Download.

What is iOS 13 Jailbreaking?

It is the process of hacking your expensive phone so you can install themes, free apps, and games and use it to the full potential. Today, due to how difficult jailbreaking has become the available tweaks have shrunken down but a steady stream of tweaks that are compatible continue to trickle out and keep the community alive all thanks to the developers who are passionate about their work.

The method introduced by Unc0ver works for the iOS devices that is powered by A8X to A11 processors which have their range between the iPhone 6S to iPhone X with the iOS 11 through iOS 13.2 installed. Moreover, it works on A12 models which include iPhone XS, XS Max, and XR that run on iOS 13 to 13.1.2. If you talk about the Chimera tool then that on the same devices and software versions but it does not support iOS 11.

For both the methods the process is a pretty straightforward method, but as they are semi-untethered so you will need to re-enable the one you want to use with the same steps below whenever your iPhone reboots or shuts down. The unc0ver tool is worth everything as it installs Cydia there into your iPhone while Chimera uses the new Sileo application.

What you need to know about Jailbreaking iOS 13

Unc0ver and Chimera to reiterate work on A8X to A12 and A13 devices but only with certain devices that work on specific software update version. These are as followed:

One thing that everyone needs to keep in mind is that neither tool will be able to work on the model of older iPhone if you have updated recently to iOS 13.2 or higher. If you are lucky enough to downgrade the version before Apple has closed the windows or has a firmware version that falls in between iOS 13 to 13.2 (or iOS 13 to iOS 13.2 for the newer models). Chimera was developed by Coolstar, a JB famous developer who also made iOS 12 Jb.

Now there are a few ways in which you can install the uncover tool there on your Iphone to jailbreak. The first method, however, is ideal enough but there are chances that Apple may cause an issue with it in the near future. We have a better second method as well but it also requires the user to redo the entire process unless and until you have a developer account which too is paid. For Chimera, we have only one good option

Now we have different methods as discussed above. These are as followed:

The Method 1- Open Tweak Box or Ignition.fun and Install in Safari

For the first method you need to follow the following steps: 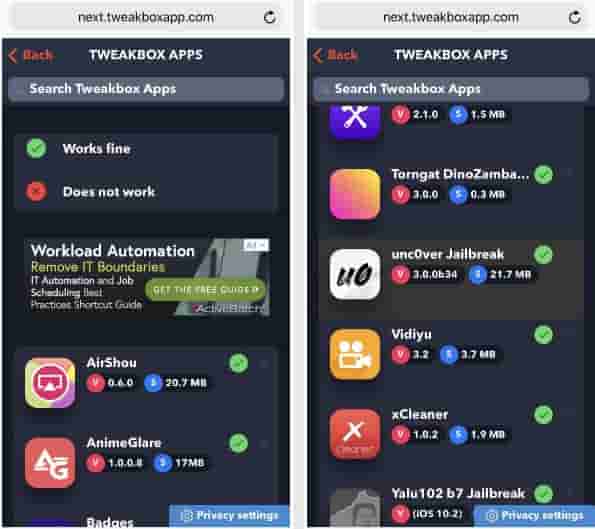 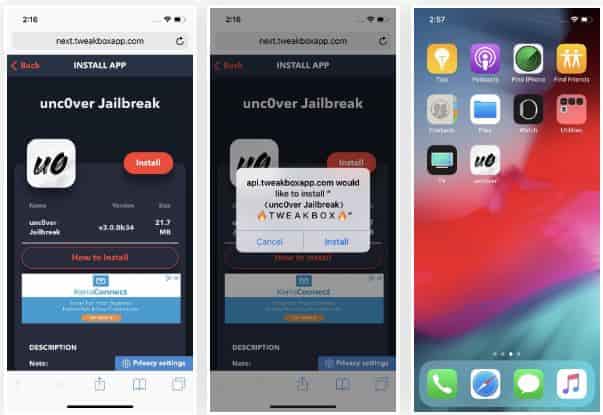 Note: it is important to note that before you adopt this way you need to know that Apple will revoke certificates for all the unauthorized applications time to time and also prevent you from installing unc0ver over Safari. If this method does not work for you the then you need to see method 2 in order to jailbreak your iphone device. The updates shall be posted soon once the certificates become available again.

You can also install uncover or chimera through Cydia Impactor to load any one of the tools there on your device. For this route, you would require either PC or Mac along with the latest IPA file for either one. You can download these from the following links

Once you have downloaded all the files that are required we can now begin with the process. The process for sideloading either tool on your computer involves plugging your device into your Mac or PC using a USB to light cable or USB-C to light cable, opening the Cydia Impactor and dragging the IPA file to unc0ver into it directly. Once prompted you to need to enter your Apple ID and wait till the process completes

If you wish to choose this method then you need to keep in mind that you would need to sideload the IPA for either unc0ver or Chimera tool every 7 days if using regular Apple ID as apple ha restriction on the free accounts. You would need to install it once a year of you are using a legitimate Apple developer ID

Considering side loading fast and relatively easy it makes no sense to pay $100 to apple for developer privileges. Thus, your weekly certificates limit does not affect the jailbreak of your iPhone in any way but it needs to be kept powered on, but if it shutdowns due to some reasons and more than a weeks’ time has passed then all you need to do is drag and drop the IPA file into your Cydia Impactor from there again. You need to go to the second step once sideloaded either chimera or unc0ver on your device.

SEE ALSO: How to Download and Install iOS 13 for iPhones and iPads.

Before you open your jailbreak tool of choice then you need to trust yourself as a developer regardless of what so ever method you have used in the first step. All you need to do is not open the app yet and follow the menu below to open device manager. 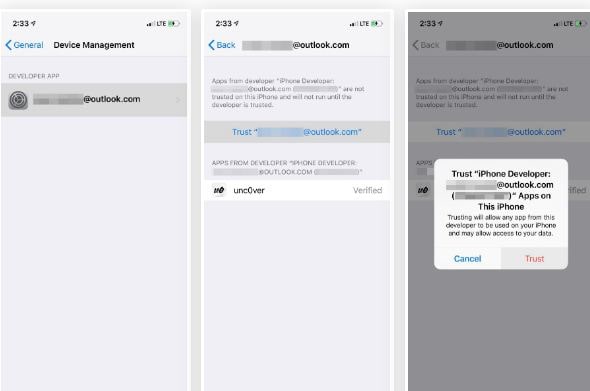 Step 3- If needed you need to Delete iOS 13.1 update from the Storage:

Now before you jailbreak the iPhone device you need to be clean from any iOS software update that maybe there saved inside your device’s storage else it shall result in fatal error and failure. You need to play it safe for the process to be as smooth as possible. 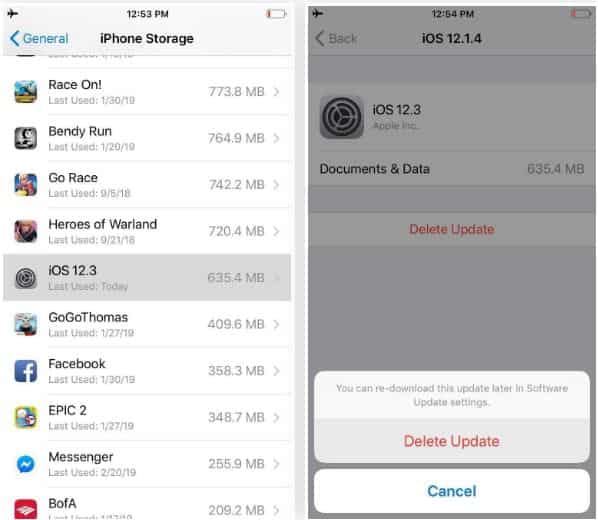 Step 4 – To run any of the jailbreak apps run Unc0ver or Chimera:

You can now execute jailbreaking on your device. For this follow the steps:

The way is now clear for you to open up any one of the application and start installing various tweaks that are available in order to customize your device and make it your own.

iOS security community members on Twitter have released Checkra1n. This is a JB tool that supports every iPhone model until iPhone X. You can JB any iOS version including the latest releases which are running iOS 12.3 and above.

unc0ver JB is now supported for devices running iOS 13.3. This is the first semi-tethered jailbreak by pwn20wnd.

According to the pwn20wnd twitter update, every iOS version up to iOS 13.5 is jailbreakable with the latest release of unc0ver JB. This jailbreak will support all devices including iPhone 11 and the Pro Max versions too! Keep an eye on the hacker’s website for the release as it will be out soon.

This is not the first time a signed OS from Apple has been hacked this year. It is a great example of what is still possible if you like customizing your Phones completely. You will be able to perform this on your PC, Mac, or even Linux machine by just installing the .IPA file.

Did you Jailbreak iOS 13?

In this article, we have highlighted for you how to jailbreak your iPhone with iOS 13 to 13.2. We have discussed two methods to select the one that best suits you. I would also recommend you to keep your iPhone secure. I hope you will now have fun with Unc0ver for iOS 13 and Chimera for iOS 13 too. They are very stable jailbreaks and do not crash often.

Please note that this post will be updated as soon as there is something official from the developers. Currently, the exploits support iOS 12 and some beta versions of iOS 13. 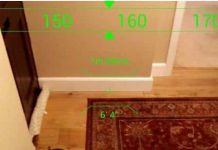 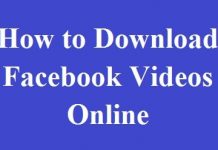