This step-by-step will teach you how to completely uninstall or remove the Office 2016 with the help of Microsoft’s Fix It Tool or Registry in Windows 10. If by somehow, you are not able to uninstall the office 2016, then you can always visit the features programs of the control panel.

The Fix It Tool is released by Microsoft, which is designed specially to remove Office. If the office 2016 uninstallation process gets failed, then to remove it and then reinstall the same version or any other, you would need to run this tool.

What is Microsoft’s Fix It Tool for Office 2016?

The Microsoft fix it tool is used to remove office 2014 or office 2016 from your computer system very quickly. It can apply the repairs automatically.

If, however, the fix it tool is not able to completely uninstall or remove the office 2016, then you need to follow the instructions very carefully.

There are certain cases in which you want to at the first place uninstall Microsoft 2016 and later want to reinstall it back again on your computer system. You are now able to uninstall the office 2016 in windows 10 as well completely. For this, there are two ways that you can adopt. These are as followed:

If you want to remove or uninstall office 2016 in windows ten by using the control panel, then you need to follow the step below:

SEE ALSO: How to Remove Activate Windows 10 Watermark in 2022.

If you want to remove or uninstall the office 2016 in windows 10 by using the fix-it tool then you need to follow the steps bellows: 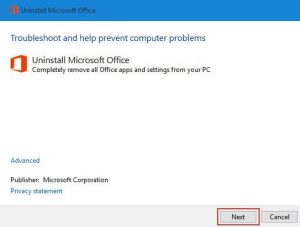 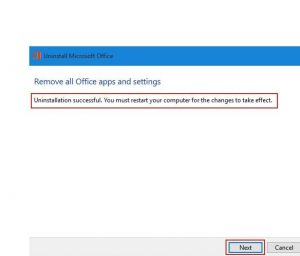 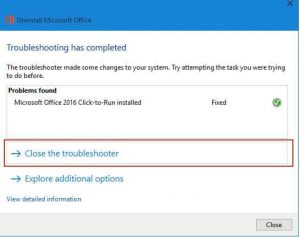 SEE ALSO: How to Fix “USB Device Not Recognized” Error in Windows 10.

If you wish to remove the office from your computer system manually, then you need to know that it is a very long yet complicated process that requires you to uninstall the OS if specific steps are carried out incorrectly

The click to run is considered to be the new trend to install and update the office over the internet. It works just like the streaming video. The latest version of office by default includes in office 365 with most one-time purchases of office 2019 and the office 2016 products like the office business, and home are installed by using the click to run.

MSI is abbreviated as the Microsoft Windows Installer. This is seen as one of the traditional ways to uninstall offices through a local installation resource.

To determine your type of installation, you need to follow the steps below:

SEE ALSO: How to Reinstall and Repair Microsoft App Store or Windows 10 Store.

SEE ALSO: How to Fix Most Common Problems with Windows 10 Installation.

This step shows you how you can remove Office 2016 using the command line:

Verifying that Office 2016 was now fully removed from your PC:

If a command prompt appears and no additional information, then it means you have successfully removed Office from your system.

Other tutorials and fixes for Windows 10:

This article has everything you will have ever needed to get rid of Office. We have explained every method on how to remove and uninstall Office 2016. This includes using Microsoft Fix It Tool for removing Office 2016 and other methods such as using Registry, PowerShell, and Control Panel. I hope this tutorial was helpful and you finally got rid of the old Office. Drop a comment below if you are having any issues.